A Simple Formula to Engage Your Team to Reach a Goal

Getting your team to buy into your company goals and culture is no simple feat.  Here is an interesting example of how one California service business got its team to step up in a big way.

The business is Ablitts Fine Cleaners, the largest and most successful dry cleaners in Santa Barbara, California.  Now before you say, “But David, what can I learn about engaging my team in our company goals from a drycleaner?” I want you to remember that innovative, sound business best practices can be found in any industry.  And Abblitts has a lot to teach.

Ablitts dominates its market in Santa Barbara, and one of the reasons besides its high quality is the free “concierge” level service that offers complimentary pick-up and delivery from your home or office.

Now you might wonder how Ablitts can afford to offer this type of service without charging extra.  Well, that’s because Ablitts knows that concierge level clients do more service volume with Ablitts.  They also know that concierge clients’ cleaning moves through the plant and back to the customer much faster.  After all, with free pick-up and delivery, Ablitts efficiently gets the clothing back to the customer in a few business days.  This helps save plant space (the cleaned clothing doesn’t hang in Ablitts for 6 weeks waiting for the customer to come pick it up) and it also helps with cash flow (remember, drycleaners get paid when you pick up the cleaning, so with Ablitts delivery, they charge the customer’s credit card on file when they deliver it.)

Sasha Ablitt, the second generation owner of Ablitts, knows that the more of her “walk in” customers she can convert at the counter to concierge level clients, the better for everyone.  Her customers get a richer service experience; her store gets more and faster business.

At Ablitts they call this upgrade of a walk in customer to a concierge client a “counter conversion”, and 18 months ago they averaged 10 per month.

First, measuring the counter conversions is a great example of a key “leading indicator”.  The fact that Ablitts understands that this is a key metric to track and refine says a lot about the strength of their company.  (Disclosure:  Ablitts has been a business coaching client of my company Maui Mastermind for going on three years now.)

It’s been my observation that very few companies have narrowed down the key metrics that are the best predictors of their businesses success to the 1-3 metrics that matter most.  Ablitts has done a smart job of this.

Now, imagine you were Ablitts and you knew that you wanted to focus your team’s attention on generating more counter conversions.  What would you do?  Give them a big speech?  Explain the importance of counter conversions to the business?  Train your counter staff to effectively ask for the upgrades?

Ablitts did all of these things, and they worked, but only to a point.  These standard business moves did help the Ablitts team increase counter conversions to 15 or so a month.

But then about a year ago, Ablitts stumbled on the magic recipe.  When they applied this simple formula their monthly counter conversions jumped to an average of over 30 per month (3-times their previous levels.)

A clear objective + a simple, real time scoreboard + a little fun and creativity

= An engaged, aligned team focused on one of your most important objectives

Here’s an example of the latest iteration of this formula – the 100 Day Challenge.  Sean challenged his counter team to get 100 counter conversions in 100 days and let them set prizes for progress along the way.

At 25 counter enrollments Sean threw a barbecue for his team.

At 50 counter conversions the counter team got new t-shirts (see the photo below).

At 75 counter conversions the counter team would get a “slip-n-slide” party.

At 100 counter conversions Sean would get the store a “Sonos Sound System” and let them choose the music they wanted to play.

Now you may look at the list of these prizes and say, “Is Sean crazy?  T-shirts?  A slip-n-slide party?  A $400 sound system for the store?”  But Ablitts draws a lot of its counter team from Santa Barbara area college students.  He understood that by letting them pick their prizes versus him picking for them his team would feel a sense of ownership and pride in the effort.

Plus, it’s likely that responsible, buttoned down Sean would never have chosen these prizes, which injected a bit of fun and play that customers found infectious and irresistible. 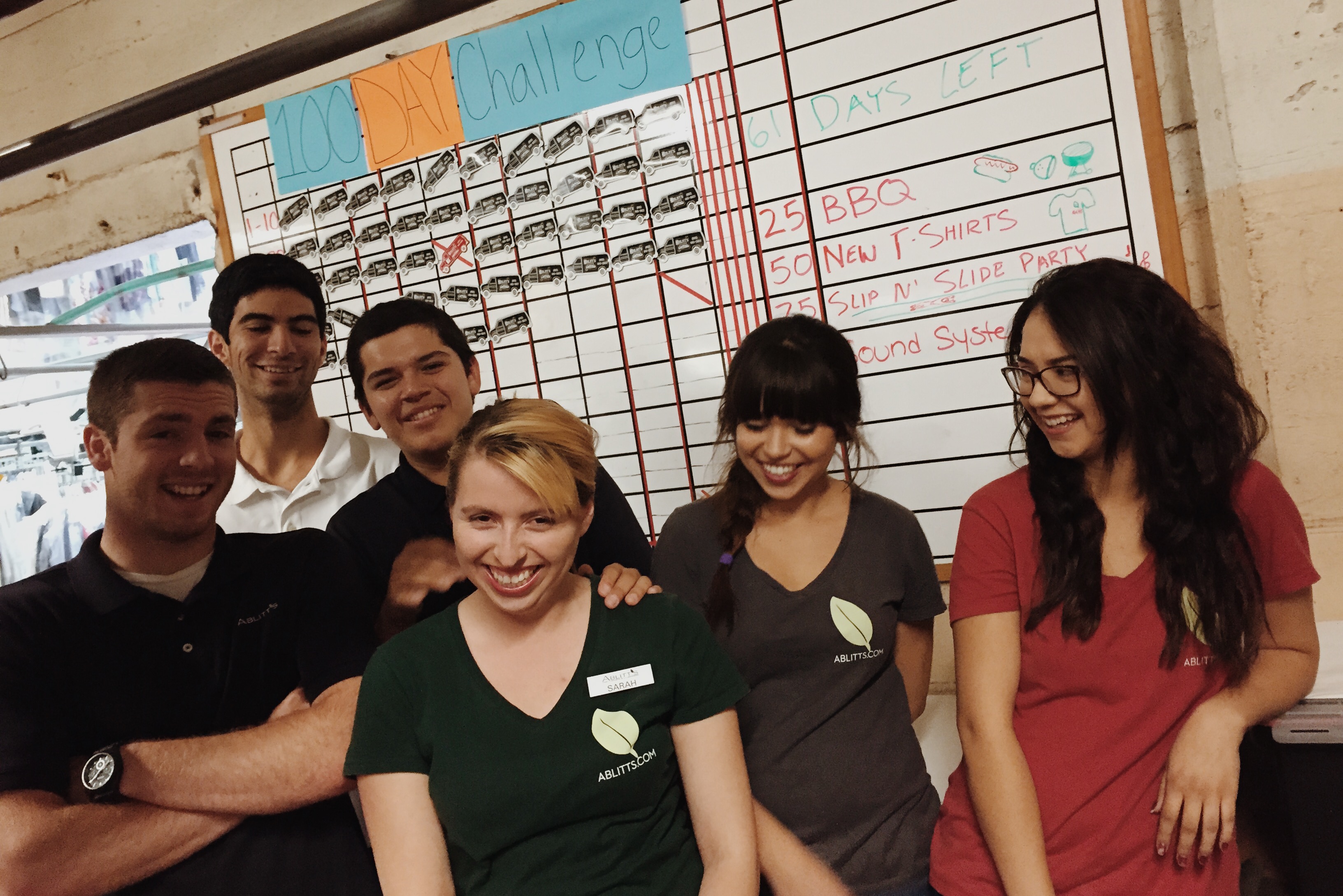 The Abblits Team in front of their tracking board for the 100 day challenge.

Each day Sean updates the day of the challenge.  And with each counter conversion the team gets to slap on an image of their delivery vans to the scoreboard.

As I write this article Sean and the Ablitts counter team are on day 55 of the challenge and already have 67 counter conversions.  That’s an average of 1.2 sign ups per day and puts them on pace to crush the 100 day challenge.

So take a hard look at your business.

What is your most important leading indicator?  How can you combine a clear objective, with a real time scoreboard, and sprinkle in a little creativity and ownership, to crush your own equivalent of the 100 day challenge?